The U.S. toy market is not only the world’s largest, it is also the one most characterized by innovation. To put it simply – half of the toy products on sale today did not exist a year ago. It is also a quickly growing one at about four percent this year unless the authorities decide to decimate it by imposing 25 percent tariffs on Chinese imports which represent 80 percent of all toys sold in the U.S. 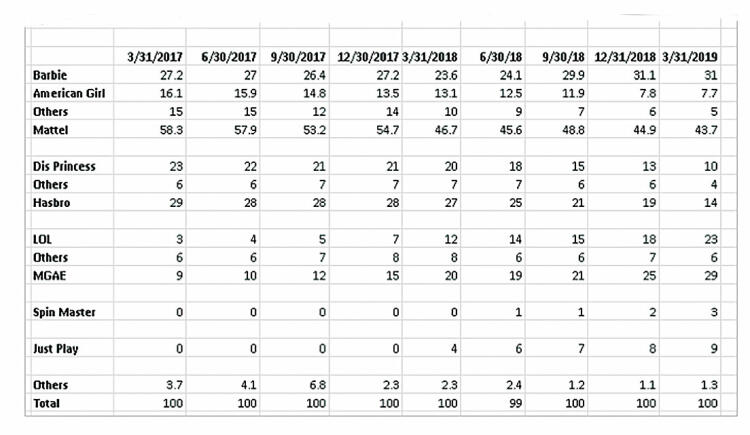 All these statements apply also to the doll category. In fact, it grew more rapidly than the market overall – between 2008 and 2018 the doll category grew 30 percent whereas the overall toy market was only plus 24 percent. So, you could conclude that being in dolls is a good place to be. However, this is only partially true if you look at Fashion Dolls, the largest segment of the overall Doll category. Yes, the growth is there and so is the innovation but it is the newcomers who provide both.
Today, there are five main drivers of the Fashion Doll category in the U.S. – Mattel, Hasbro, MGA Entertainment, Just Play and Spin Master. The first two have lost significant market share whilst the other three have gained massively. Table 1, based on the Klosters Retailer Panel sell-through findings, tells the story.

These sell-through assessments are supported by shelf space readings at the major brick-and-mortar retailers pre- and post-Toys‘R‘Us bankruptcy (Table 2).
As you can see from the first chart, the real game changer in the last two years was LOL, a toy produced by MGA Entertainment – the famous makers of the Bratz doll – and launched late 2016. The LOL doll represented a completely new concept and it took the toy world by storm.

It is a small doll that comes with its own accessories inside a layered surprise ball. This ball is layered so that children peel off each layer to get to the doll in the center. Each layer is filled with different items. Some have stickers and ring tattoos. Some have “blind bags”: small colored bags that you have to open to see what’s inside. LOL is now in the process of becoming the #1 Fashion Doll in the U.S. and is already there internationally.
The other major entrant is Just Play who was not a factor until early last year. Just Play launched four Fashion Dolls in rapid succession – JoJo Siwa and Vampirina in 2017 and Spirit and Hairdorables in 2018. The company is now a major presence in the U.S. and is beginning to make inroads internationally – particularly in China where its Hairdorables dolls are in second position just after LOL who is the market leader there.
Lastly, SpinMaster. The company had a long and not overly successful history of launching fashion dolls – Liv in 2009, La Dee Da in 2012 and PowerPuff Girls in 2016. None had any impact and all went away rather quickly. This year may well be different. They launched Party Popteenies in the middle of last year and the brand is already doing pretty well in North America. They also came out with another fashion doll brand this year – Off The Hook – and put it into Wal-Mart, Target and Amazon. Neither has so far made an impression internationally but both have the potential of doing so.
Given the propensity by the American consumer for considering economy the major purchase factor one would be excused to think that these success stories are due to lower prices. This is, in fact, not the case as the average price of the top Fashion Doll products of each company shows (see graph).
Disney Princess, arguably the least successful of the brands shown, is also the least expensive. Not shown above is American Girl, also a brand in serious doldrums, which is sold only at two price points – $115 and $60 – and is in a league all of its own.
As all brands mentioned are promoted in-store and advertised on cable TV, this too does not account for the difference in sell-through performance.
No, the difference is innovation and the best example for this assertion is Barbie. Barbie was in free-fall starting in 2008 when its market share in the U.S. stood at about 50 percent and it hit its lowest point at 16 percent in 2015. Since then, the brand has slowly but steadily regained market position to where it is now at 31 percent. The turning point came when Mattel launched the Barbie Fashionista line in 2016 which recognized that girls do not come in “one shape fits all”. The Fashionista line offered three new body types — “tall,” “curvy” and “petite” — and an expanded range of skin tones, hair textures and colors and face molds. Product innovation has since then continued and the Barbie aisle at the major retailers shows an extent of diversity completely unknown as late as 2015.
In contrast, Disney Princess continued to rely on past movies rescreened on cable TV. It in fact got its major push with “Frozen” which was released in November 2013 and which proved to be a phenomenal hit. At that point, the market share of Disney Princess stood at about 20 percent. This jumped to 23 percent at the end of that year and hit its highest mark at 39 percent in March 2015. Since then it has consistently gone downhill, and as Table 1 shows, the brand held a mere ten percent at the end of March this year. Innovation and promotion for the brand has continued to rely on movies – Cinderella in 2015, Beauty and the Beast in 2017 and Mermaid in 2018 – and neither succeeded in arresting the downward trend. It remains to be seen whether the second Frozen movie will do so when released later this year. In fact, the buyers at the major retailers are very optimistic that it will indeed do so.
An absence of real innovation is also noticeable when looking at American Girl. Yes, there is a new doll out every year but the underlying theme and hence the execution differ very little from one doll to the other. Given the fact that American Girl is also one of the most expensive dolls on the market, real innovation is a must and its absence is best shown in its sales decline. However, Mattel fully recognizes that it has a problem on its hands and is committed to engineering a turnaround which, they admit, will likely take years. 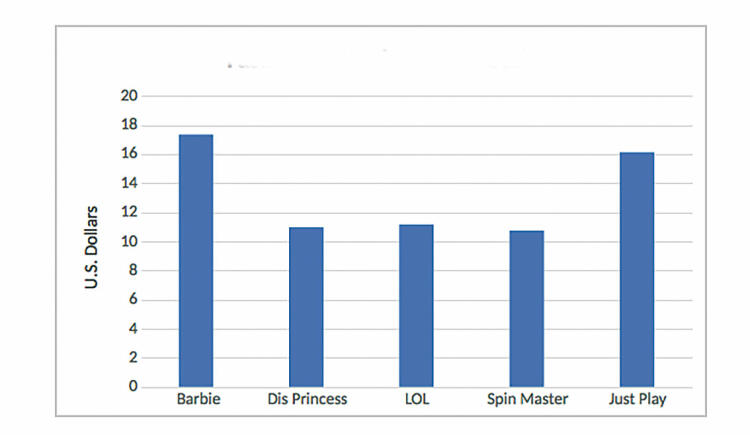 Whilst this review is focused on the U.S. market, it would be a mistake to overlook innovation happening in Europe. There is one brand that has the promise of making a real impact there – I’m a girly, produced by Finfin AG, Switzerland. The company was founded less than three years ago and has already managed to place its Fashion Doll line in all the top European stores – Franz Carl Weber and Manor in Switzerland, KaDeWe in Berlin, Alsterhaus in Hamburg, Harrods and Hamleys in the U.K. – and this despite high price points which are similar to those of American Girl in the U.S. The secret of the company’s success is that all its products are on an ongoing basis created by girls and boys aged between nine and thirteen years old, are continuously adapted to new trends, and are manufactured under very stringent Swiss quality standards. “I’m a girly is spot-on, well made, and moves pretty well”, one of the buyers states. It can be expexted that the company is now eyeing an entry into the United States and it will be very interesting to see how I’m a girly fares against its major potential competitor, American Girl.
The final take-away is that innovation and adaptation to preference trends in a consumer group as fickle and fashion-conscious as pre-teen girls is the core differentiator between success and failure for this toy category. 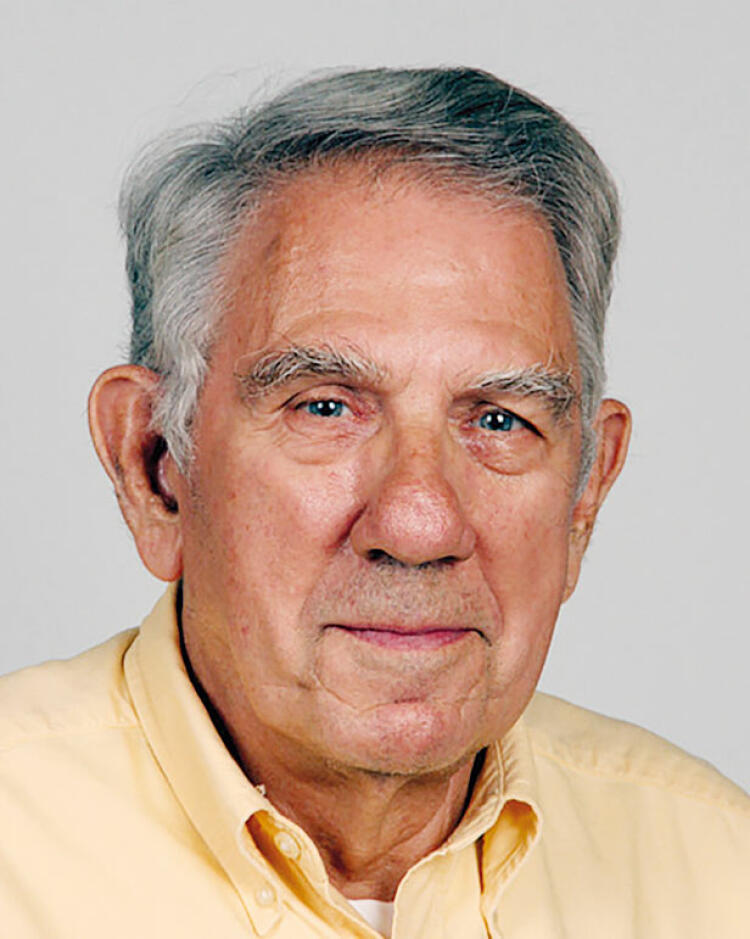 Lutz Muller is an expert for the international toy industry. Until 1984 he was a CEO in the manufacturing sector. His consultancy Klosters Trading was founded in 1987, his customers include toy company executives as well as financial analysts. Furthermore, his contacts include buyers for the 30 largest toy retailers of the 17 largest markets worldwide as well as numerous Chinese toy manufacturers. He also publishes a monthly subscription newsletter.