Collectible toys have been around for a long time, but they have only of late become a major force in the toy space – to the extent that they now contribute significantly to the growth of the toy category overall. The first question to ask is what differentiates a toy collectible from a regular toy?

According to the national buyers queried on this, the major difference is the purchase motivation. Regular toys are mainly bought for entertainment and the purchase is to a large degree triggered by a movie or an advertisement. Collectible toys are driven by two very different motivations – one is simple greed, the hope that the toy you buy and carefully store away in its original package will one day be worth a lot of money; the other is the need to build on toy experiences made at an early stage in life and to expand on these through a never-ending search for products to add to what you already have. The second difference is the consumer group. Toys are essentially bought by children who are the decision makers even though it is the parents who foot the bill. Collectibles are bought by adults, mainly male, and this typically in the middle to upper income groups. The third difference is the degree of permanency. Toys tend to have the life expectancy of a day fly and are bought and discarded as the triggering movie obtains and then loses resonance. Collectibles tend to be strategic purchases where the individual acquisition fits into a long-term plan.
Many financial analysts believe that Collectibles could well be a fad and could flame out in a couple of years from now. This is in fact very unlikely given the profile of the devotees to the category – which very clearly includes their average age of 35. In other words, the current group of collectors can still look forward to about 40 years of happy collecting. This does not mean that collectors can be taken for granted. Collectors accounted for about 15 percent of all Star Wars Action Figure sales in the case of The Force Awakens. This dropped to half or about seven percent in the case of Rogue and then by another third for the Last Jedi. In the case of Solo, the collectors stayed away completely. Reason? Too many movies in very short intervals and too many action figures going over old ground.
In any event, Toy Collectibles are a very large and rapidly growing business. Whilst it may slowly be approaching a levelling-off of sales in the United States, penetration internationally currently is much lower and as a result growth rates are much faster. This, too, is unlikely to change over the course of the next few years.
To demonstrate just how important Toy Collectibles are in the overall context of the toy market, graphs 1, 2 and 3 may be of interest. 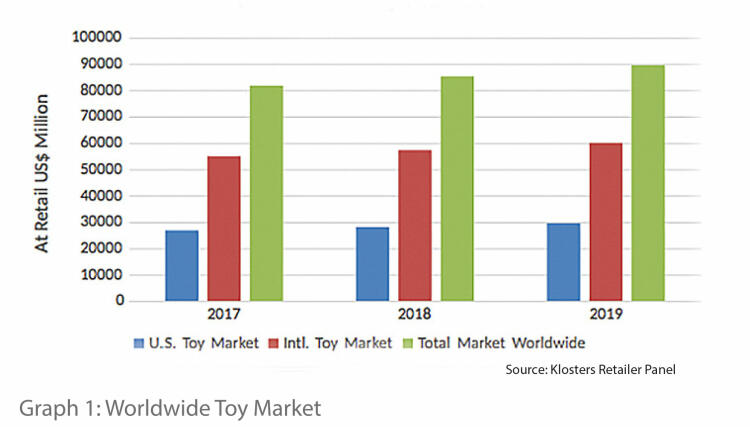 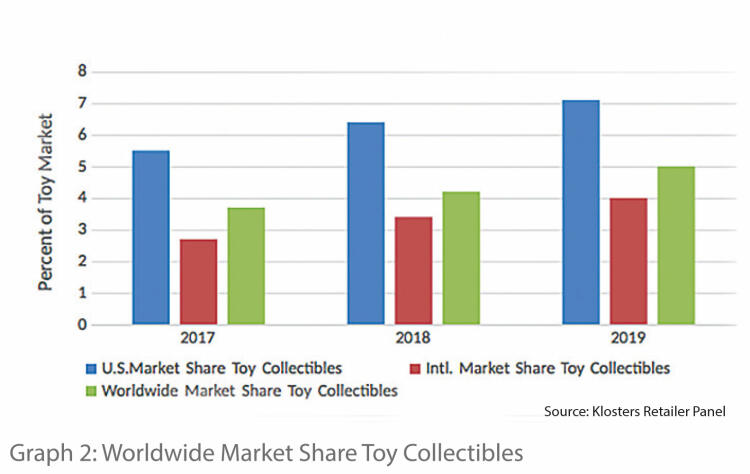 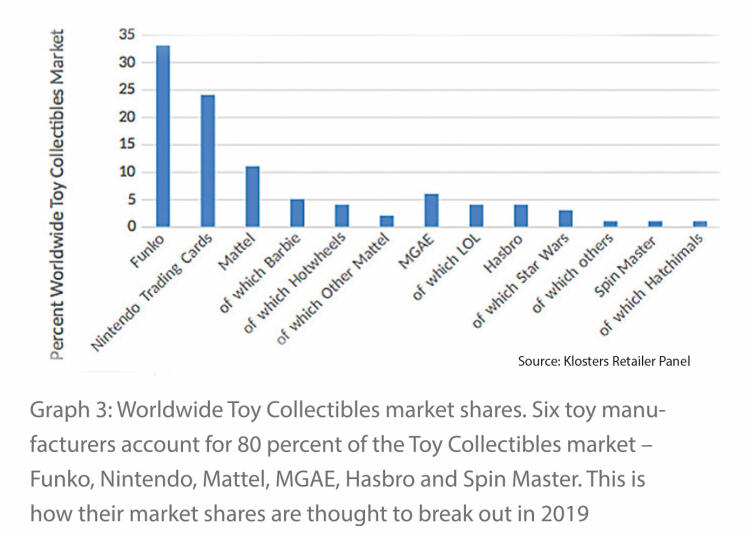 Typically, there are two types of Toy Collectibles – passive and active ones. The passive ones are those where the manufacturer does not target the collector but where the collector focuses on toy brands which he or she is collecting. Hot Wheels is a good example for this. Mattel does not produce Hot Wheels that are specifically designed to attract the collectors. Barbie, on the other hand, is an active collector brand and there are a number of Collectible SKUs available online at Target and Wal-Mart at prices from 477 dollars down. Nintendo trading cards are a major factor in Collectibles as graph 3 demonstrates but there is no indication that the collector is specifically in Nintendo’s crosshairs. For all these companies, regardless of whether they are actively or passively addressing the collector, their main business is selling toys to children.

The leader of the pack, Funko, is totally different in that it is a brand and a product range built around film licenses and designed for the collector only and is not dependent on the regular toy space.
The company was founded in 1998 by Mike Becker who thought he could create a small business by selling bobbleheads, banks and hand puppets based on nostalgia-friendly niche properties. His initial line-up of licensed items features Popeye, Dick Tracy, General Mills cereal characters such as Count Chocula – and of course the Big Boy mascot. He proceeded to get the rights for his Bobbleheads of three then small licenses – DC, Marvel and Lucas, also known as Star Wars. This small business stayed very small and Mike was ready to chuck it all when Brian Mariotti, the current CEO, expressed an interest in buying the company and finally did so in 2005. Using the company’s three licenses, Brian began to produce a line of pretty unique small figures that would become the Pop line. Soon, Funko was able to secure 25 more licenses, and eventually pushed the product into outlets other than comic-book and collectible shops. Since then, Funko was sold twice (whilst keeping intact company management and staff) and made three acquisitions. These were the major milestones:
l The company was sold to Fundamental Capital in 2013 to raise capital for further expansion.
l Then Fundamental Capital sold the company to Acon Investments LLC in November 2015.
l Funko acquired in January 2017 its European distributor, UK based Underground Toys, estimated sales 15 million dollar.
l Funko in April 2018 then acquired Loungefly, a small (seven million dollar sales in 2017), manufacturer of handbags and accessories, mainly marketed under movie licenses such as Disney, Marvel, Star Wars, Sanrio and Pokémon .
l The company in February 2019 purchased Forrest Pruzan, a boardgame developer, and has since launched six SKUs at Target and Wal-Mart. 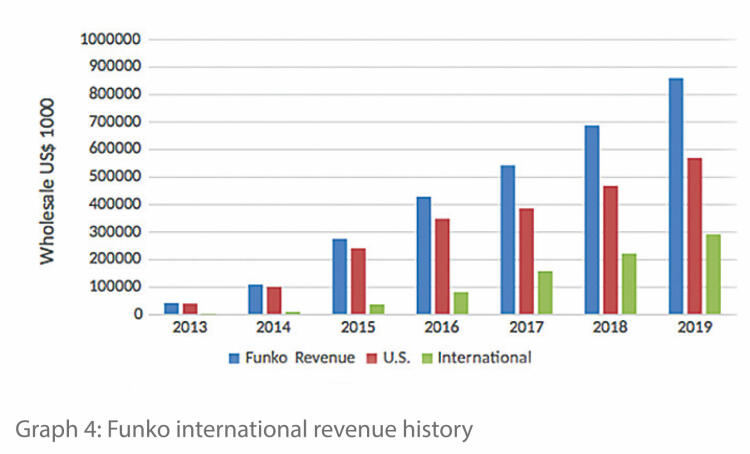 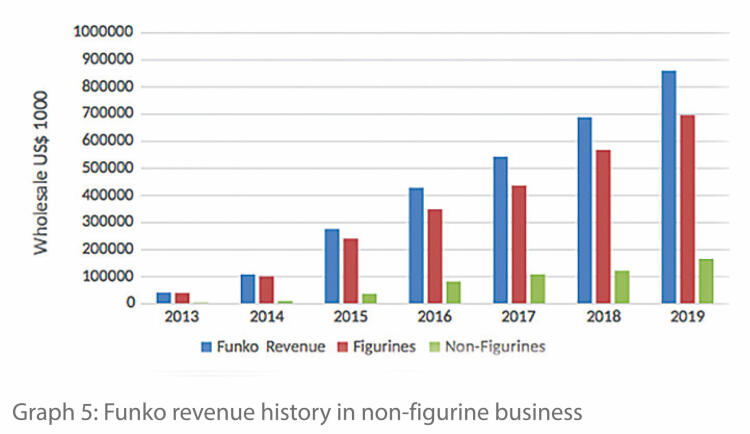 To ensure further growth, Funko embarked on two strategic initiatives. One was to expand further from its home market, the U.S., to other countries. In this they were very successful. At the end of November 2019, Funko’s Pop products were in the top Action Figure positions in Brazil, China, France, Italy, Mexico, South Africa and Spain. Graph 4 demonstrates how international versus domestic sales developed since 2013.
The second strategy was to develop a non-Figurine business, mainly in apparel and this specifically in T-shirts and hats and now, with the acquisition of Forrest Pruzan, also in boardgames. Whilst this endeavor is still relatively small, it is growing rapidly and this with particular emphasis on large markets outside the United States (graph 5).

The secret of success

The success of Funko is basically due to three factors. One is that they have all the licenses worth having – 1100 in total of which 200 are currently active – comprising all the major IPs driving the toy market. The second is that they are the fastest out of the gate. It takes them less than three months from the moment they have acquired a license to get the product on to the shelf. This compares to a year to eighteen months for most other toy companies. The third is that they have no competition worth talking about. Hasbro launched Mighty Muggs in January 2018 but the range has not so far gotten any traction, be that in the U.S. or internationally. Mighty Muggs now has 19 SKUs out at Wal-Mart and nine at Target, all online only. National buyers report that sales are marginal. Funko also benefits from three retailer-related factors. One is that the national retailers like the company and trust it. The second is that the company does not allow its retail inventory to become obsolete. The third is that the retailers are continuously expanding the shelf space allocated to the company – in fact, Target is now including Funko also in its toy aisles for Figurines as well as apparel.
The outlook appears to be pretty strong. The company continues to rollout both their figurines and other products worldwide and still has a lot of leeway there. They also continue to promote all major licenses very aggressively on the back of movies or cable TV – Frozen 2 being a case in point. Speaking of movies, a film based on the Funko toys is in development at Warner and it appears that it will be the first theatrically released movie film to crossover Marvel and DC Comics characters – given that character to be included will be Deadpool, Harley Quinn and Wonder Woman. The film was announced to be in active development on September 19, 2019, and it can therefore be expected to be released latish 2020.

Overall, there is no reason to think that the Toy Collectibles market will slow down anytime soon as there is a lot of expansion potential mainly in emerging markets, notably China. It is logical to assume that Funko will eventually face some heavy-duty competitors but one thing is certain – whoever it is who is venturing into this space will have some hard sledding given the head start Funko has at this point already.