TOYS Global – Having Fun Playing Together

Do Chinese families with two children have different preferences in buying toys than families with just one child? An investigation of the Chinese toy market from the fourth quarter of 2018 by the Hong Kong Trade Development Council (HKTDC) addresses this question.

The toy market on the Chinese mainland remains promising. According to Euromonitor, the branch sales rose on average by 19.1 percent annually from 2013 to 2018. Furthermore, the National Health and Family Planning Commission reckons with an annual increase of between 17.5 and 21 million children by 2020 in addition to the 233 million children under fourteen years of age living in the country as of 2017. The two-child policy was introduced in 2016.
Higher purchasing power
In its survey of the Chinese toy market, the HKTDC aimed to discover whether parents with two children have different preferences in purchasing toys to parents with only one child. Altogether, 2 000 parents in 16 Chinese cities were questioned, including 180 parents with two or more children. As these families enjoy relatively high purchasing power, they spend 20 percent more money on toys, and also buy toys on average four times more per year than families with one child. With regard to the reasons for buying toys and the factors taken into account by parents, no great differences between the two were determined.
However, children with siblings come into contact with electronic games later than single children, on average at 5.5 years of age, in comparison to five years. One reason may be that parents with two children have to satisfy a higher demand for toys, and inform themselves through different channels and search for alternatives in online shopping. 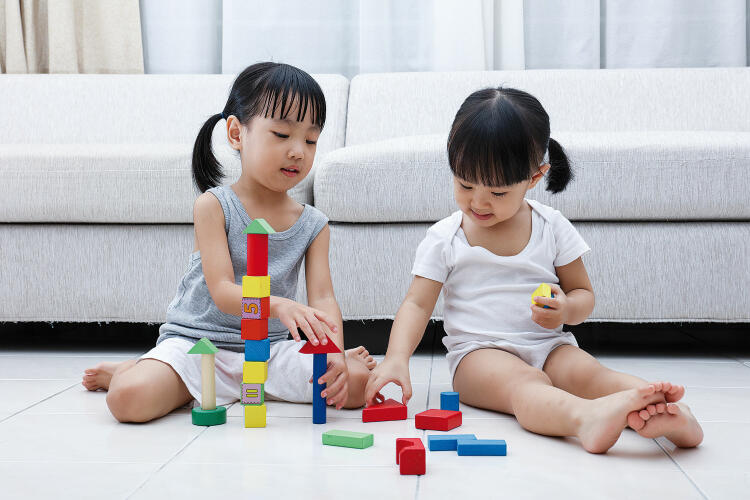 Last year, these parents bought toys on average 19.4 times, spending a total of 3 017 RMB (around 394 euros), that is 462 RMB (around 60 euros) more than parents with only one child. Generally, families with more than one child have a
higher household income and therefore, higher purchasing power.
The type of toys bought is dependent on whether or not the siblings have different genders. If parents had both a boy and a girl, they bought 7.61 different types of toys on average. The parents of only boys or only girls bought 5.63 different types. In this case, two toys of the same type were often bought. A father in one of the focus groups reported that this would show his sons that he was fair, and furthermore it avoided any argument between the brothers.

Toys for playing together

No difference was evident in the motives for buying toys. All families are convinced that learning should come before recreation. In families with two children, the highest value is placed on the nurturing of skills (51 percent). Fostering intelligence and rewarding the child with toys was mentioned less by these families. According to what the parents said, one reason for this might be that with the second child, they were more experienced in parenting.
In these families, the development of social skills through toys is emphasized. As one father explained, the toys were to aid the older child guiding the younger one in a game, strengthening the bond between the two. Therefore, games that the children can play together at home are chosen more. There was no difference in the two groups of parents regarding the importance of games being suitable for the age group (50 percent) and safety (38 percent).
A more critical view is taken of the influence of electronic games. In the past few years, the Chinese government has recommended parents to guide children in playing electronic games, and not to keep them occupied with them for longer periods of time.
In comparison to families with one child, parents with two children exercise stricter control over the age at which they first come into contact with electronic games. Fewer of their children come into contact with electronic games before the age of three to four years. 19 percent of these parents believe it important for the children to be nine to 14 years old. Only seven percent of parents with single children share this view. In this context, parents of two children regard it as important that the children play with one another, rather than with electronic games.

In comparison to one-child-families, parents with two children make use of more channels to inform themselves about toys. These channels include short-video-apps, outdoor advertising as well as information from the children themselves. Their preferred shopping channels are the local shopping websites, super- and hypermarkets and toy markets. The shopping websites are so popular because they provide greater choice and more convenience. They also offer special features and brands otherwise unobtainable on the Chinese mainland. Many parents in the focus groups remarked that they had planned toy shopping better for the second child, using their experience to purchase more durable and better quality toys.
Companies attempting to establish themselves and their toys on the Chinese mainland should therefore focus on high quality and safety, designing the toys to encourage the children’s interest in learning. As further market growth is expected for the forthcoming years, companies with a focus on these factors in their portfolio have a good chance.