TOYS Global: Construction Toy Market – The Whale against the Minnows

Most toy products are focused on one specific consumer group – either the child for the play value the toy provides; or the parent for the learning properties promised by the product. Construction toys are driven by both. Toy manufacturers engaged in the Construction toy space often focus totally on the child’s play aspect and omit to reinforce the parents’ perception of the developmental property of the product. Recent history suggests that this can be a fatal mistake.

Construction toys also differ from all other toy categories in that it is completely dominated by a single company. Lego truly is the whale that swims amongst the minnows. All major toy companies have tried to get a meaningful piece of the action – notably Hasbro, Mattel and Spin Master. None have succeeded in establishing their own brand against Lego and two have resorted to buying existing companies in order to enter the category. Even then, both have had very hard sledding indeed.
Incidentally, I have not included Playmobil in this assessment as the products made by the company do not provide bricks and are hence more of a traditional preschool product range competitive with Fisher Price. Even so, Playmobil managed to break into the Construction Toy aisle at Wal-Mart U.S. and is doing very well there – out of the fifteen SKUs listed, ten were out of stock at the end of August.
This report would not be complete without a brief mention of K’Nex. It is a U.S. company, founded in 1992, and at last look the only one still producing in the United States. K’Nex’s business is virtually exclusively in the United States and its sales are too small to show up in any market share comparison. The company was acquired by Basic Fun in 2018 but we have not seen any major initiatives following this acquisition.
Here is a short summary of how the four companies got to where they are today:

The company was founded in Denmark in 1932 and started what we now know as the Construction Toy category. It built this category all by itself over the years and by 1984 had created a market position which began to attract would-be competitors. However, the company continued to grow and to maintain an absolutely dominant position until turn of the century when its management decided that full-scale diversification was needed to ensure future growth. That, unfortunately, nearly killed Lego and the company was close to bankruptcy by 2003. A change in management took place with Jørgen Vig Knudstorp taking over as CEO in 2004. His strategy of focusing on the development of the core company product, the famous brick or tile, paid off and the company quickly recovered and drove its own sales and hence those of the entire product category to ever-increasing heights. He also introduced a licensing program which included icons such as Star Wars.

This strategy was inordinately successful and had the added benefit of representing an easy solution to the innovation mandate governing toys. You got the movie license, you made a couple of sets using the movie characters and presto – you had innovated! What Lego did not recognize at the time was that in their total focus on toy licenses they also totally focused on the “play” aspect at the detriment of the “learning” aspect.
In addition, they slowly ran into trouble since the action figure movies on which this license program relied hit the big screen in ever more frequent sequels and led to what is now referred to as movie fatigue. By 2014 this led to a slowdown in the sell-through of Lego products around the globe. However, since the company did not adjust its growth ambitions to this reality this led to an ever-increasing effort to overload the trade with goods to compensate for slowing sales. This eventually resulted in a situation where the retailers refused to take more merchandise than what was needed and this led to a sharp fall in the company’s revenue in 2017. 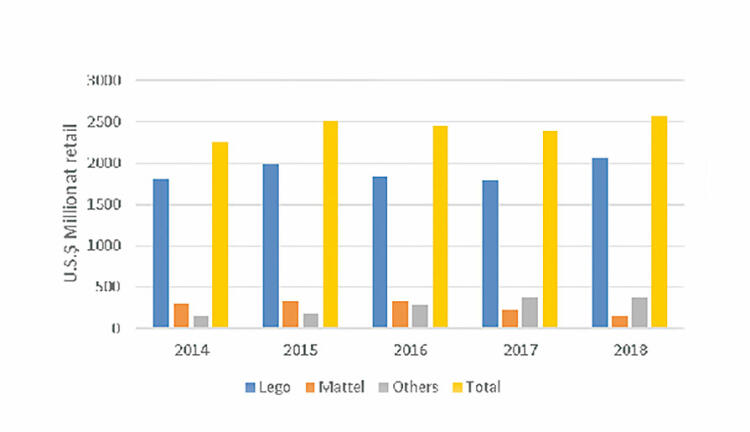 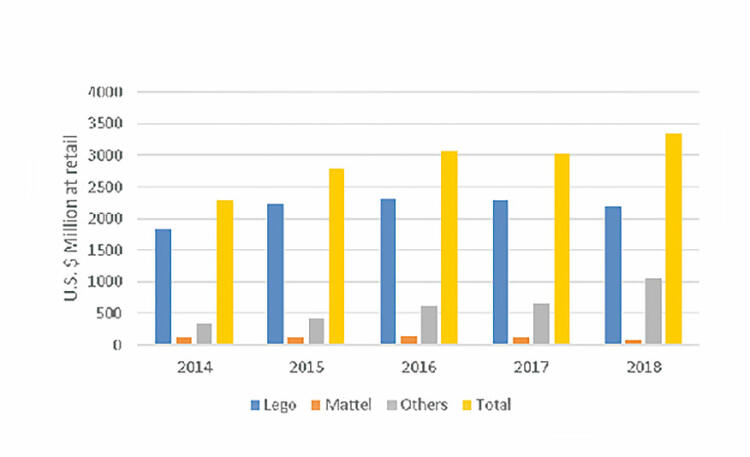 The result of this was two-fold – one was a cost reduction program which led to the cutting of 1400 jobs; the other was a re-orientation of the product innovation process away from a reliance on blockbuster movies to an in-house emphasis on product innovation. In other words, the company pivoted again back to give increased importance to the learning as opposed the play aspect This change in strategy appears to have worked out well and the company is again on a solid growth path.

Mattel first tried to enter the Construction Toy market in 2009 with Trio, a product range very similar to Lego. However, it never got traction and was finally withdrawn a few years ago.
Mattel then acquired the Canadian Mega Bloks Company in 2014. Mega Bloks were the only real competitor to Lego with revenue worldwide in 2013 of about US$ 300 million (not including the Rose Art craft product sales) which compared to Lego’s toy sales (not including video games etc.) of about
US$ 3300 million.

Mattel began to rollout the Mega Bloks range worldwide in 2015 with shipments that year of US$ 350 million. They again did a little better in 2016 when shipments hit an all-time high of US$ 367 million. However, these shipments were not matched by sell-through but were achieved by aggressively opening new retail outlets but this without providing the required promotional and advertising support necessary to ensure that the stuff in fact also moved off the shelves. Shipments in 2017 dropped by about 27 percent and again in 2018 by 28 percent. There are indications that the company’s fortunes may have begun to improve in 2019 but there is little expectation that it will become a major factor in the construction toy space anytime soon. 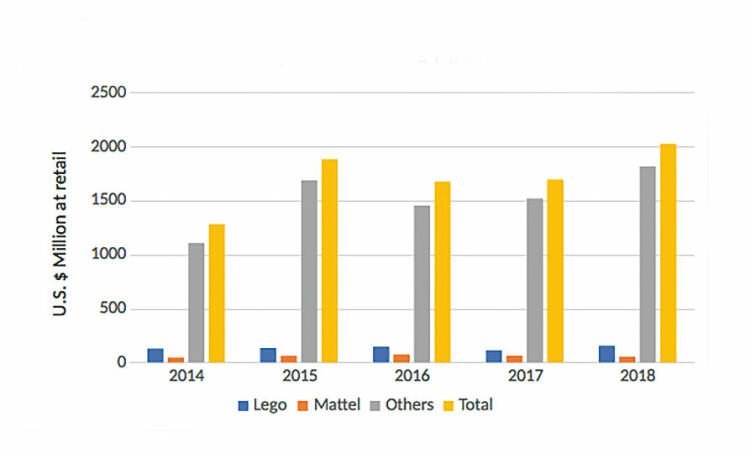 The company had up to 2015 not been active in the Construction toy space but they were very much aware that the category was not only very large but also rapidly growing. In addition, they saw the near-monopoly enjoyed by Lego as an opportunity for a nimble newcomer with a good product. They decided to enter the space by acquiring Meccano, a French manufacturer whose Erector brand had very good reputation in Europe but practically no presence or brand recognition in the U.S. This acquisition took place in June 2015 and at that time, Meccano had an estimated sales volume of US$ 40 million.
Since then, Spin Master succeeded in establishing the Erector range at Toys‘R‘Us but this came to a sudden end when the retailer went belly-up last year. Spin Master did manage to migrate some of these lost sales to Target and Erector has now a very small shelf presence there. Current worldwide sales of Erector by Spin Master are estimated in the neighborhood of
$ 50 million.

The company tried to enter the Construction toy category in 2011 with their Kre-O brand. However, it never gained traction and Kre-O was finally withdrawn in 2018.

Looking at how the Construction toy market evolved over the past few years, and how the major participants in it fared, shows clear differences in global distribution.

Whilst Lego clearly had a tough time in 2016 and 2017, its total dominance over the category was never in doubt. The turn-around started in 2018 and is continuing into 2018. There is at this point in time no reason to expect a reversal anytime soon. Its major competitor, Mattel’s Mega Bloks, continued to struggle whereas the “Others”, including Spin Master’s Erector, gained market share at Mega’s expense.
Europe and Canada
Lego is still suffering from its setback a couple of years ago but all indications are that the company is recovering and has returned to its growth path in 2019. Mega Bloks are still struggling and there is at this point no end in sight given the ascendancy of “other” brands. These are specifically: in Germany Limmy’s, CreaBlocks, Unico, Kpla, Papi Max and Play Mais; in France Plus Plus, Intex, Meccano, Infinitco, and Betoys; in Spain Falomir, Tonoteen, Teifoc and Sipobuy.

While the overall Construction toy market in this territory has again begun to grow, Lego’s share, and that of Mattel, is miniscule. The majority of the market, particularly in India and China, is driven by indigenous brands and just plain knock-offs. However, there are indications that Lego is beginning to benefit particularly in China and Indonesia from three developments. One is the rapidly expanding middle class who can afford the relatively pricier Lego products; the other is the growing awareness that products such as Construction toys of superior quality can benefit children’s mental and physical development. The third is Lego’s greater emphasis on channel penetration – in China it is vastly stepped up cooperation with Beijing Semia Technology and Beijing Sunglory Education to provide educational services in the country; and in Indonesia by appointing Map, the country’s foremost toy company and retailer, as its exclusive distributor.

This is how the charts 1,2 and 3 translate into worldwide Construction toy sales and market shares for Lego, Mattel and “Others”. 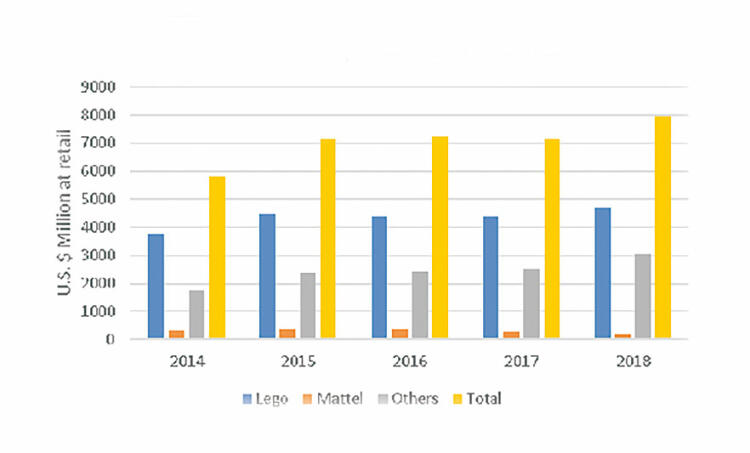 Leapfrog has just released their LeapBuilders range of construction toys. They are completely focused on the “learning” aspect of the consumer motivation for the category. LeapBuilders lets kids use interactive buildingblocks to combine classic block play with sounds and curriculum-based learning content. They are designed to facilitate creative learning while encouraging children‘s problem solving and fine motor skills. Specifically, LeapBuilders sets feature an electronic Smart Star cube and double-sided learning blocks. When a learning block is inserted into the interactive Smart Star, it responds with sounds, educational songs and learning content.

The range is now available in the U.S. online at Wal-Mart [10 SKUs] and Target [6SKUs]. At this point, both retailers report only very marginal sales for the range.
Whilst Leapfrog has had a very tough time of late, it is still a major competitor in the Learning space and it will be interesting to see what results a total focus on learning will have.
The final takeaway is that the Construction toy space is likely to keep on growing at or above overall toy market growth and that Lego will continue to totally dominate the category. Lego’s growth will depend to a large extent on the degree in whichit manages to increase its market share in Asia Pacific and Africa where at this point indigenous brands and knock-offs dominate. Indications are that the right steps in this direction have already been taken in China and Indonesia and the other countries – notably India – are likely to come next.